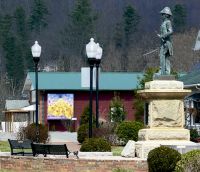 The sundial is located on North Main Street just off the town square on the office of the Yancey Common Times Journal.

Bob Hampton, an amateur astronomer and sundial maker living in Yancey, came up with the idea and design, and Barbara Webster, director of Quilt Trails of WNC, and her husband Martin created the large sundial.

Hampton suggested the idea to Webster when he noticed that many of her quilt blocks had radial patterns that reminded him of sundials. “I did the sundial calculations, star map, and gnomon design, and then Martin used those results as the basis for the quilt art design.”

The mountains at the bottom of the design are a graph of the Equation of Time, which is the difference between clock time and sundial time. This allows you to find clock time by using the sundial.

The star map at the top represents the orientation of the sky as it was at sunrise on Dec. 29, 1833, the first sunrise over the newly formed county of Yancey.

The sundial project has been the subject of numerous newspaper, magazine and television stories and is a favorite stop in town for visitors and groups of school children.

In January 2011, a group of local officials, along with Webster and Hampton, traveled to Shelby, NC to accept a top state award for the sundial project. Barbara Webster accepted the NC Small Town Main Street Award for promotion for the Quilt Block Sundial located on the newspaper office building, which is visible from Town Square.